After sleeping on it and some reassuring words on my last post I decided to continue with this kit!

Not only is this just my second kit, but when I rebooted this hobby I already made the conscious decision to not go straight for the high-end and more expensive brands. I already accounted for failure by buying the cheaper Revell kits rather than a Tamiya kit for 3 or 4 times the price. The only thing is: the Spitfire just feels a lot cheaper, where as the FW-190 just seems to offer a lot more for just a couple of euro’s more. That makes it even more of a bargain though, so I just need to go for it and have faith in myself and if I should fail take good note of what went wrong and learn from it.

Since there is more work coming up that needs some time to properly dry up I want to at least have a very broad idea of what to do when:

I wrote this list this morning and as much as energy allowed I started some work. 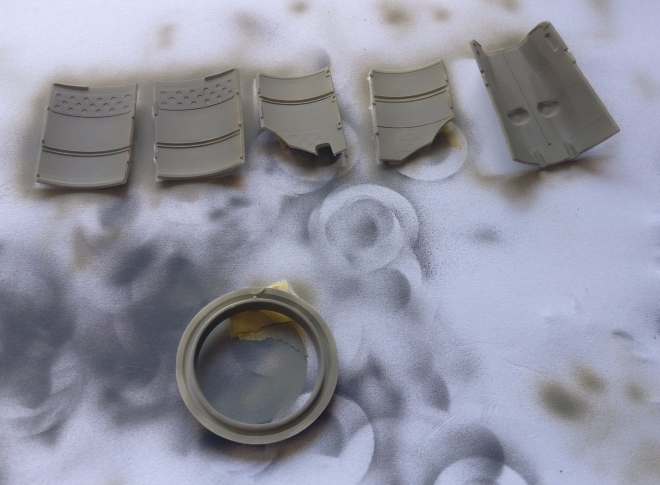 First I painted the last of the insides of the engine panels. I have to say I have a lot less trouble with the airbrush now I use a thinner mixture, I just have to apply a second layer after half an hour.. I neglected to do that here and the paint is still slightly too thin.

I will fire up the airbrush for one final round of olive since I haven’t decided yet which panels I want opened up.. so I want them all to look good! Besides I also found I missed one part that still needs olive color..

I decided I wanted to try some primer at this point before messing up the FW-190.

I think my first attempt was sprayed from way too close. The layer in the picture above is better, although not smoothly applied everywhere.

And the result after three layers:

Very educational day in modelling world for me..

What I still have to research:

My plan is to ready up the rest of the body tomorrow in terms of sanding and filling, and maybe also use the part I used primer on today to try a bit of the FW-190 livery on! It’s drying in the shed tonight while spreading a strong chemical smell.

7 thoughts on “Leap of faith!”