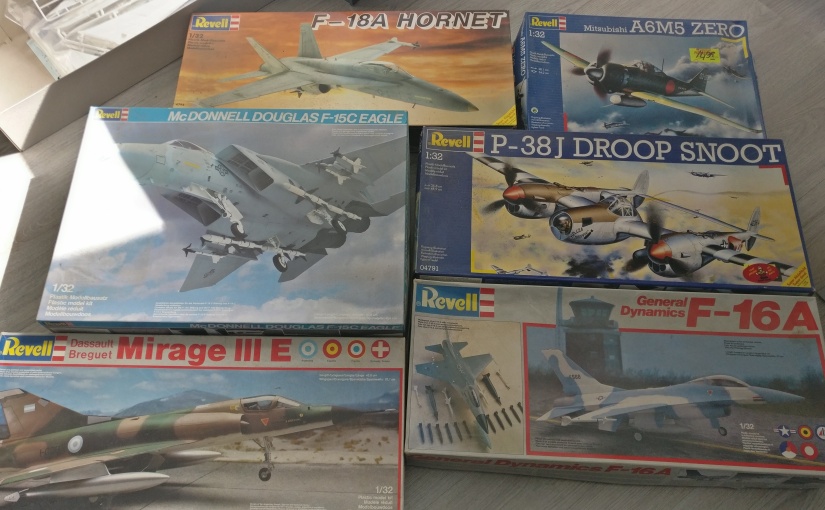 You wouldn’t say it is a topic for a modeling blog but: Yesterday I had a fantastic family BBQ! Not only did I enjoy the company and the food, I also went home with a lot of awesome stuff! 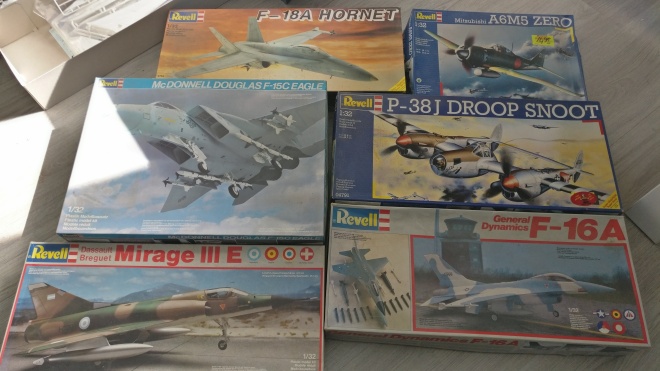 My dad was ‘cleaning out his closet’ and had a number of kits laying around on which he hadn’t started work. He said he would have to live to be a 110 years old to complete the stuff he still has, so since I recently picked up this hobby again I hit the jackpot here!

The P-38 is definitely my favorite, but I also love the A6M5 and the F-16 which has Dutch decals with it! The F-15 is a complex kit which I can really sink my teeth into, the F-18 is a bit simpler if I remember correctly but hey, it’s an F-18! I don’t know much about the Mirage III, but anything to practice techniques on is fantastic of course! It has some nice camo and what a great place to experiment with pre-shading the cockpit!

I am thinking I will likely start work on the A6M5 as soon as the FW-190 is done as a new WW2 kit. I have to say, this kit is a bit simpler than the FW-190 or even the Spitfire, but it does have the radial engine as a separate component. The simplicity really seems to lie in the flaps, rudders, ailerons etc. which are molded straight on rather than being separate parts. It’s only 22 steps in the instructions I think, and that can be refreshing!

All these models of course need a very good cleaning and I might have to actually order some new decals for some of them because they appear to have had a rough brawl with time. But I love to have a proper stack of kits now and since I know he reads this blog every once in a while: nogmaals bedankt Pa! Ik ga er wat moois van maken.

And another great bit of news I think:

It is not a perfect application. Especially on the camo’d area in the rear there has been some build up during spraying. But that is fine for my purposes. What I did differently this time: didn’t thin the stuff at all and applied on layers that had dried over night. I think this looks much better and I will be applying a decal and try some weathering on this thing!