I’ve been thinking about writing a blog for a while now, but truth be told I have another huge time eater in my life since recently!

Since last summer I was convinced my days spending time behind a computer for fun were over, but since I started feeling better and better and having gone back to a full work week I realized I didn’t only get better at my job by having better focus on the thing I am doing. I was also ready again to spend my free time doing ‘complex’ things. Complex in the sense that most of the computer games I used to play have at least some learning curve to them.

A few weeks ago I actually started playing ‘War Thunder’, but the arcade feel was an instant let down for me. I had seen the IL-2 series in the past, but the title caused me to never look into it.. after all, the IL-2 wasn’t a very interesting plane to me so why would I play a game about it.

Well it turns out that the IL-2 Sturmovik Battle of Stalingrad/Moscow/Kuban series is so much more than a series about the IL-2. I am amazed each time I play about the level of detail and the feel of the different aircraft.

I came across a small Dutch IL-2 squad looking for members and joined that group. Here is me doing a bit of flying with on of the members:

Where does this hook in to the model building hobby for me? Well I am getting all sorts of vibes about stuff I want to build, and the details on the planes are amazing. Especially the weathering looks amazing and will be great inspiration for how things might look on a WW2 plane.

Speaking of inspiration: I originally planned to get a new Revell kit for my birthday, but at the last moment I changed the subject and decided to go for another subject.

I had been eyeing this kit for a while, but my IL-2 involvement made me change my mind about the present I wanted. I can’t keep my eyes of the in-game eye candy, so here is a shot of the plane in the game:

It will also be a great tool to get an impression of how a cockpit would look like: 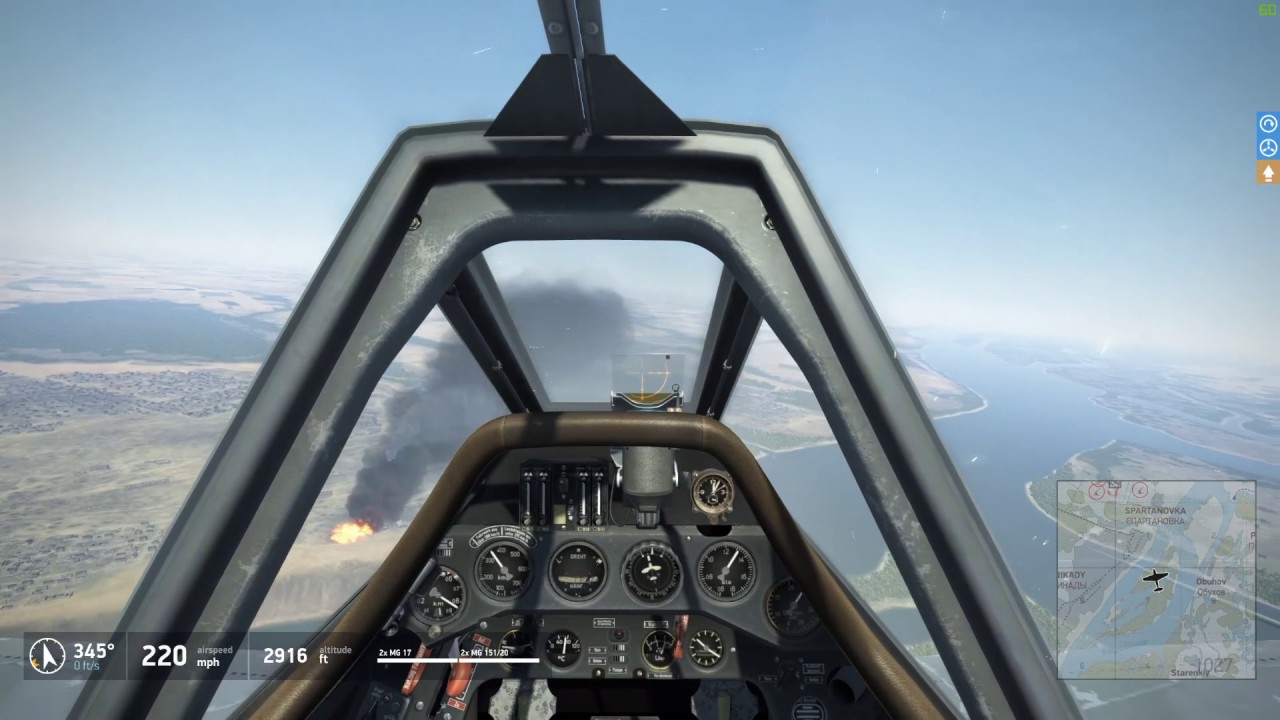 Before I finally move on to some actual modeling in this blog, here is one more of me almost starting a bomb run with a squad mate in a PE-2:

All in all, I hope to find a lot of the modeling subjects I am interested in find its way into the game!

In my last blog I finished up the underside, so now it’s time to do the same thing on the top. I’m having some problems with my airbrush unfortunately, so it took me a while to get the result I wanted.

I called it a day before reaching the back of the plane..

This morning I put on the second layer. Seeing it like this I think I will want to add some darker green on the final layer, but that’s fine.

I am happy with another reasonable job on the freehand airbrush job.

It isn’t done yet. The final layer will be thin, and as I say a bit darker to get a better Zero look. I mixed this color myself from mixing the light gray the instruction booklet indicated (which looked totally off to me) with some tints of light and dark green. I am reasonably happy with this tone of green and I gather there were some different tints of green going around on these planes, but I think it is definitely a bit too light on this medium layer.

That’s all for now! Next time I will put on the final layer of green and mask and spray the canopy.

The first big part of the paint job is done, and I am happy with it so far.

The first task since last weeks blog was putting a final layer of primer after filling some holes in the fuselage. 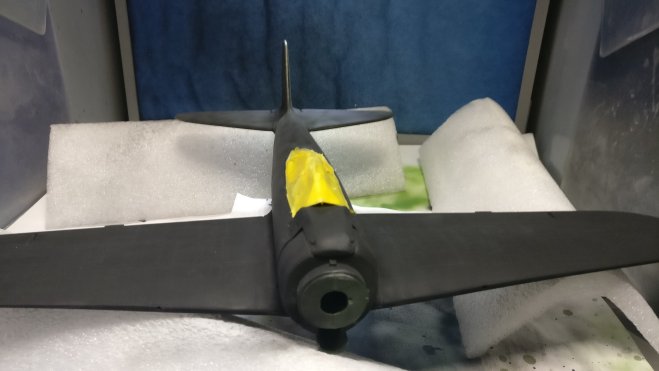 After masking off the tail wheel we’re ready to go! 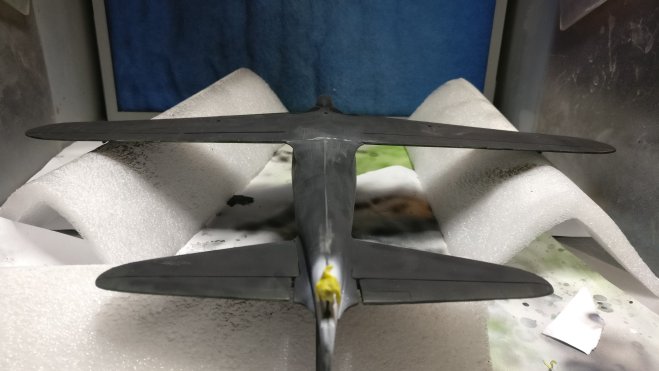 Tuesday-evening it was time to celebrate Sinterklaas‘ birthday, and the old man got me my first armor kit! This is a very cheap and simple kit, which is perfect to give armor a first try! I left home happy..

But about an hour after going to bed my girlfriend woke me up with disturbing news.. Unfortunately one of our cats, ‘Dunnie’, died. Not in anyway related to this blog, but he deserves an honorable mention anyway. 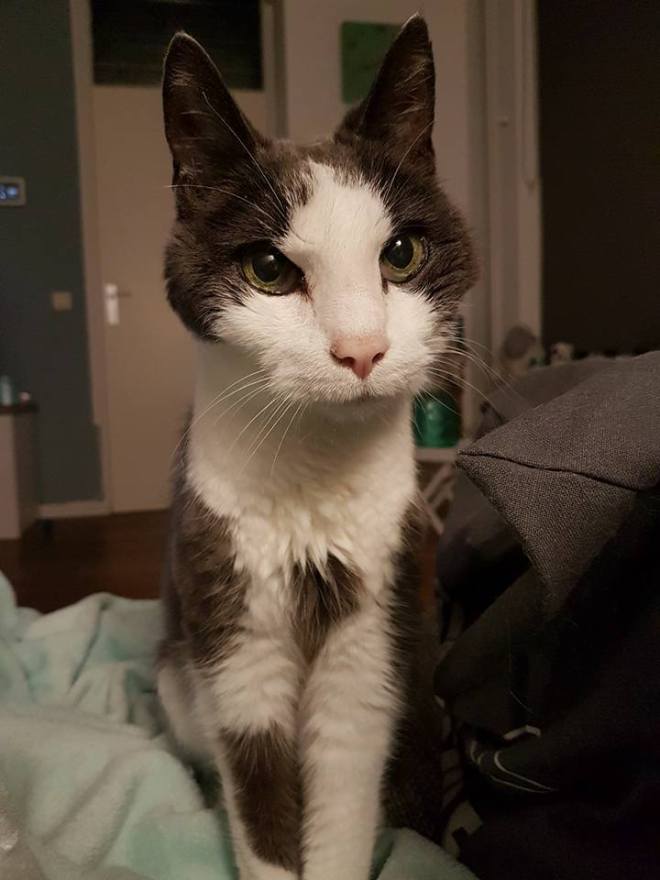 He was 16 years old, so a very respectable age for a cat.. still, we are very sad to have to say goodbye.

Anyway, back to modelling. I did the first layer on the underside on Monday. I thought the color would be white, but it is actually light gray. In the Revell world, that would be #371, the same color that I’ve had a horrible time with on the Cargolux Boeing 747-8F. This color seems to dry up really quick, and I have had the same problems last week.

Still, after four layers I am happy with the result:

I really like this technique. It is a lot of work, but filling in the panels is fun and the uneven result is actually very interesting to look at.

There is something I have to take more care with in the future, and that is probably mainly because the black primer shows less details than the gray Tamiya Surface primer I used on the last builds.

There are some parts that could have done with some more sanding, but it just didn’t come out with the black primer. I have done more sanding in between the layers, but it wasn’t enough by the looks of it. I might take another try to correct this, or I might take the lessons to the next kit.

Next up: painting the other side of the plane! 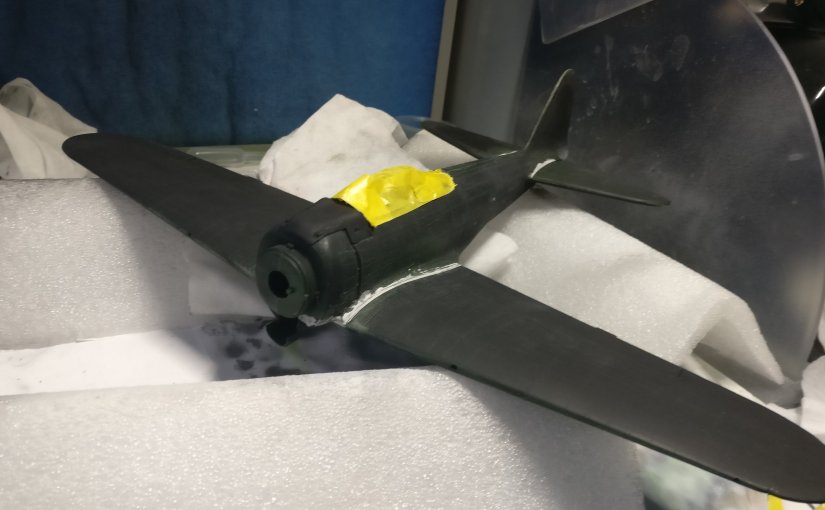 Compared to the last weeks I have put in a bit more work. Seeing it come together really boosts the enjoyment I guess.

Since the already painted rear wheel can only be placed before the halves are attached together I choose to do a first layer of white around that area.

As you will see at the end of this blog, I am ready to start working on the livery and thus I took one of the perfect illustrations by Rikyu Watanabe from the book I bought a few weeks ago. I noticed on the illustration that the rear wheel area isn’t completely white on the A6M5, which I found supported by other pictures from the book.

Time for actual assembly. The wing part isn’t actually glued on at this point as the photo would suggest, but I couldn’t help myself.

In the meantime I had a look at the canopy/windscreen situation.. first I made a start at masking the whole thing. I then decided I hated that, and after some sanding I decided to try and hand paint over my brothers effort of a decade ago..

I hated the result, and I hate hand painting almost as much as masking of the clear parts. I guess I will have to switch my brain off and do the job. For now I decided to move on though.

The next day I attached the wing assembly and the fuselage together as tight as possible. It was already obvious during the test fit that this wouldn’t be a tight fit straight away, so I already mentally prepared for another filler operation.. Revell Plasto should be enough for the seams that are left. 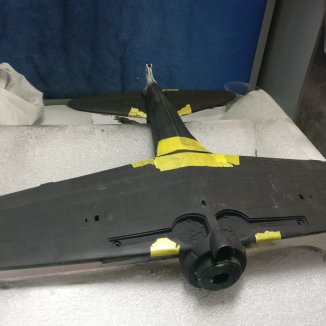 I learned from my earlier Plasto usage on the FW-190 and this time used some tape to mask off some of the detail, even if the amount of detail on this kit is minimal compared to the current generation of plastic. 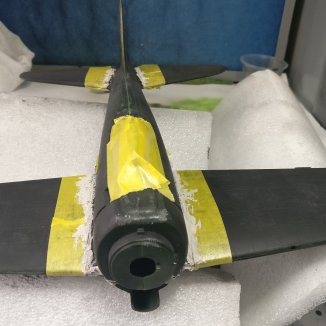 Another thing learned for the next time: why not just use a bit more tape to mask of both sides of the gap? I thought about it before starting applying the Plasta, but I decided to wing it. Some Plasto has gotten onto the wrong places, but there are not a lot of panel lines to accidentally  fill on this particular kit, so I am lucky to learn another lesson before it really matters.

This is the result after using a wet wipe. The filled areas should be sanded down well enough, although as said I could have done a better job at masking.

I also masked of the entire cockpit. On the FW-190 I tried using a temporary canopy. Well, for this model I don’t have a temporary canopy, and I doubt it will give me much of an advantage to first get the canopy on anyway.

The plan right now is

I have kept a blog by Darren from The Scale Model Hangar in my mind since the moment I read it last September and so I wanted to try the technique on this model as soon as I started it, because as Darren explains it is a good way to make a monotone color scheme more interesting to look at. The blog really is a good single page to show the technique, which is great.

A more detailed look at the the Black Basing technique can be found at Matt McDougall’s YouTube channel. I will look at both these sources before trying it myself!